The Mullard Blackburn Xf3 black base EL34 valve is introduced as a successor of the famous Xf2 EL34 in the late sixties, this was the third EL34 version made by Mullard Blackburn. The Xf3 type EL34 was the first version with stapled plate, after this type finally came the Xf4 which ended production in Blackburn in the 1970s. The tubes are used but have NOS test values. Both tubes are produced in the same week: second week of may 1975.

Please note that the plate of one tube shows some colouration; this effects the aesthetics but doesn’t influence the performance.

The sonics of the Xf3 EL34 is typical for the Mullard Blackburn sound character and is among the worlds most musical EL34 tube known for its pronounced liquid midrange.  I refer to the many reviews on the web. And they seem to last forever.

Please read our test and shipping policy before buying ! 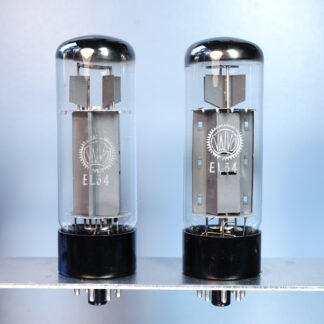