Here is a quad of very strong GEC TT21 tubes. All two tubes have been produced in 1974 and the other pair in 1975 by GEC in Hammersmith, UK. I bought the tubes in the 90’s from CVC UK. The left pair on the pictures has been used shortly in my Beard P100, the other tubes have been tested but are unused.

The TT21 is apart from the top-cap anode connection fully identical to the GEC KT88. The top-cap connection was introduced to make the tube suitable for radio frequency power amplifiers which requires a high anode voltage. Due to the top cap anode connection the maximum anode voltage of the TT21 is 1250 Volts, compared to 800 Volts for the regular KT88. Some mention that the TT21  due to it top cap anode is less microphonic. In the following the TT21 is described as a regular KT88.
Socket converters from TT21 to KT88 can be made by an electronics engineer or con de obtained on the internet

Extract from the GEC TT21 data sheet. The data-sheet says that the TT21 may be used, as a pair, in place of the KT88 for audio use. This is not a revelation as the two Types have the same design history, the TT21 being modified for higher peak anode voltages and having a top cap anode connection to prevent flash-over at the base but otherwise the same valve.

This is the military version of the vintage GEC KT88 (NOT a Russian or Chinese) reissue)! The vintage GEC KT88 is a legend that was produced in the period from the end of the fifties till he end of the seventies. The tube is a so-called kindles tetrode (KT) and was the British response to the famous USA Tung Sol 6550. It was designed to be the much stronger stablemate of their KT66, which was used in the Quad II amplifiers (and many other) to very good effect.

The tube is a powerhouse; amplifiers that were designed for the vintage KT88 (like e.g. Mcintosh Mc75 and Mc275, Beard P100 and others) often will blow the modern reissues. And of course delivers superior sonics compared to the Chinese and Russian production KT88. Till today no modern tube construction can replace the original GEC KT88. They lasts almost forever; even when the getter flash has disappeared many KT88 tubes still perform strong.

This quad of TT21 valves has incredible nice test values and are matched very well (stronger Ia than many new GEC KT88 that I have measured in the pas years).

The GEC KT88, which has become known as the best sounding KT88 ever made.  It’s fame has caused this tube to become nearly impossible to find. The vintage GEC KT88 creates an open sound image with smooth but extended treble, a natural midrange, silky trebles and a thunderous bottom end. The GEC KT88 is considered by many as the king of the KT88/6550 tubes; better than any other! I refer to the many reviews on internet.

The measurement data below show that the tubes are nicely matched.

Please study photos carefully; what you see is what you get! Ask any questions before bidding. Thanks

Please read our test and shipping policy before buying ! 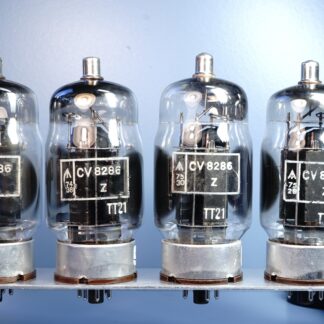